I finished and much enjoyed reading the classic Of Human Bondage. I hope some of you started reading, or rereading, this beautiful book; and I hope you enjoyed my little pieces briefly analyzing some of its pages. In other news, Atlantis Magazine published my review of the novel. You can read it here: http://www.atlantismagazine.net/Entertainment/Of-Human-Bondage.html 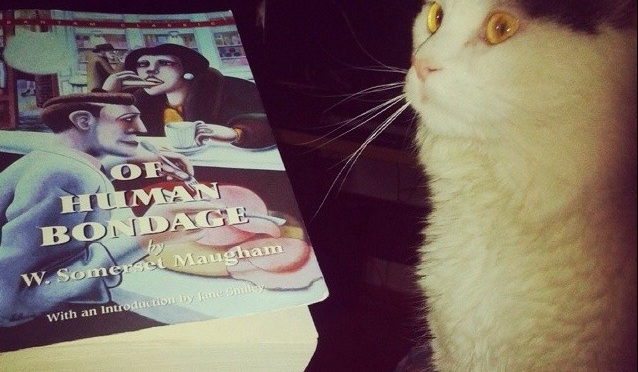 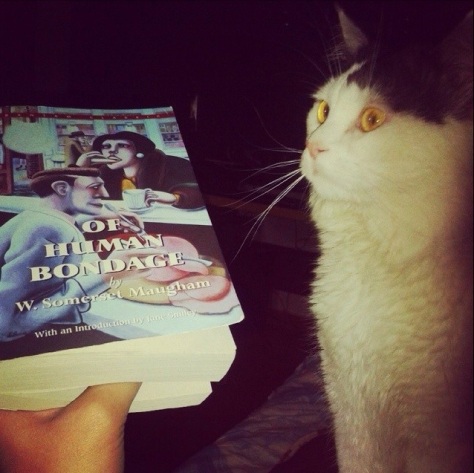 This part of the book analysis will be my last, since I can’t summarize any further without spoiling the story — assuming I haven’t spoiled it already. I hope you enjoyed those little posts I’ve been submitting and I hope some of you started reading Of Human Bondage. Soon, I will post a review of the full book. Share your opinions about this story with me.

Pages 301 to 330: Phillip meets Mildred, the center of the action and premise of the story. What strikes me most is the way his feelings for her creep at him without him noticing. At first, the feelings he acknowledges are abhorrence and loath. Later, however, he finds himself interpreting her every word and yearning for every bit of attention she pays him. It isn’t until later that he admits to himself that he fell captive of her love.

How the author describes the feeling of love for an insecure person is echoing through my brain. To him, love is pain. He craves the attention of those who neglect him, hates them when they treat him badly, and then hates himself for loving them and allowing them to hurt him further. What strikes me is how quickly Philip became possessive of Mildred. One of the nights she refuses to go out with him, so he waits for her outside the restaurant she works in so he could make sure she wasn’t going out with someone else. Needless to say, things are going downhill fast.

Pages 90 to 135: In those few pages, Philip transitions from being completely immersed in the religious experience to becoming utterly repelled by it. When Phillip moves to Germany for a year and meets new friends who are not as religious as he had been, he starts to form new ideals. Those ideals led him to believe that one should not believe in a religion to begin with.

The author explains how his protagonist felt unbridled after shedding the necessity of belief, and how stupid he felt looking back at all the days and nights he went out of his way to satisfy his god. The author also explains how, after Philip stopped believing in religion, he still abode by the manner which Christianity taught him. It was as if he went out of his way to prove to himself that not all atheists had unethical behavior.

I would like to end this short post the same way I ended this section of the book, by quoting a certain passage that I especially enjoyed and found eternal wisdom in. It is written below in italic.

He did not know how wide a country, arid and precipitous, must be crossed before the traveler through life comes to an acceptance of reality. It is an illusion that youth is happy, an illusion of those who have lost it; but the young know they are wretched, for they are full of the truthless ideals which have been instilled into them, and each time they come in contact with the real they are bruised and wounded. It looks as if they were victims of a conspiracy; for the books they read, ideals by the necessity of selection, and the conversation of their elders, who look back upon the past through a rosy haze of forgetfulness, prepare them for an unreal life. They must discover for themselves that all they have read and all they have been told are lies, lies, lies; and each discovery is another nail driven into the body on the cross of life. The strange thing is that each one who has gone through that bitter disillusionment adds to it in his turn, unconsciously, by the power within him which is stronger than himself.

My Tweets
Join 9,997 other subscribers